A Day In The Life

Exercise: My #1 Tip to Feeling Good During Treatment 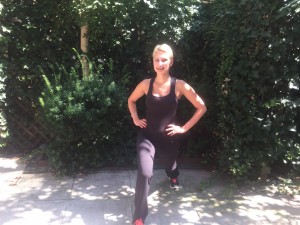 Prior to cancer, I exercised only sporadically. I played field hockey and softball in high school, but post-high school I found it hard to find the motivation to exercise without the competitive nature I was used to.

Upon learning my diagnosis, one of my incredibly fit colleagues recommended constant exercise during treatment — advice she was given by other cancer fighters at her gym.

As someone who was already lazy about exercising, I listened to the information and thought to myself, If I don’t already work out, why would I start while going through chemotherapy?

I could not have been more wrong. About two weeks after my first treatment, I began to feel really weak. I was never a pillar of physical strength, but I was having trouble finding the energy to do daily household chores. I decided I couldn’t sit in my apartment any longer and let myself grow weaker, so I began walking every day for about an hour. The fresh air and routine helped, but it still wasn’t quite enough. I attempted a light jog one day, but could barely make it three minutes — those three minutes felt like an eternity.

I lived near a yoga studio and upon asking for information learned they offered barre as well. I thought to myself, I always wanted a ballerina body, and I have the time, so why not give it a try?

I cannot stress this enough: exercise is the best medicine. It was hard — really, really hard — but I felt great (and exhausted at the same time). After about a week of throwing myself into a routine I felt my body growing stronger. My oncologist was thrilled that I started exercising. I was even able to beat my niece, a gymnast, in an arm wrestle (after she kicked my butt in a show of strength prior to chemotherapy).

Not only did the endorphins help, but the classes provided a routine, something to look forward to every day. It’s also widely believed that sweating helps the toxins from chemotherapy leave your body so you can recover from your treatments faster — I felt it did. Plus studies show that exercise may reduce the risk of cancer, so why not take every reasonable step to help reduce the chance of this disease returning?

No matter how weak you may feel, try exercising. I promise — it will pay off. You will feel better emotionally and physically, and adding that routine to your life will give you a sense of purpose during your fight.